The Love Of Spinning

Firstly, let me clarify. When I talk about spinning, I'm not referring to riding a static bicycle at a gym, What I mean by spinning is turning my body, feet connected to the earth.

When we were children, spinning came very naturally to us, we would spin ourselves until we fell over, shout out to be spun faster as we held on tightly to the roundabout in the playground, the roundabout turning into fairground rides as we grew older. I still love the Waltzers and still shout out to be spun faster. Why did we enjoy spinning so much? I remember the feeling being one of absolute exhilaration. But not everyone enjoys the feeling of spinning for some it comes with dizziness or nauseous and the older we grow and the less we spin in our lives, the more uncomfortable it can become.

There are various thoughts on why humans experience dizziness and nausea - this is linked to balance, motion sickness and the vestibular system of the inner ear. A short blog I found, gives a good explanation.

Not everyone finds spinning difficult. I began spinning with my hoop about 2008, I was inspired by a video I found of two American hoopers Spiral and Jewels . I then became intrigued by Sufi spinning or Whirling Dervishes and attended a ceremony at a Sufi centre in London. Sufism is a mystical branch of Islam and is a moving meditation and prayer to God.

The Sufi dancer always turn in an anti-clockwise direction and eyes remained unfocused, the right hand is raised towards the heaven to receive divine energy and the left hand to the earth to channel the energy down into the earth. (I love this idea) Our planet also spins anti-clockwise when viewed from the pole star as do all planets in our solar system with the exception of Venus and Uranus. So when we are turning in that direction, we are aligning ourselves with the turn of our earth and the planets.

A couple of years ago when I was in Egypt I met a a Tanoura dancer - which is a spinning dance very similar to whirling dervish but with no religious context, purely for entertainment. Astounding and mesmerising to watch and even more so with their LED light up skirts!! I went back stage after a show and we had a spin together, me with my led hoops and the tanoura dancer with his LED skirts!

Hoopers generally have a preferred direction in which they like to turn, mine is anti-clockwise (although I definitely encourage you to hoop in both directions!) so this seems to flow well with my interest in the sufi practice. However, when I began to spin, I wasn't looking for a mystical experience - it was just a new way of moving with my hoops. I found that spinning came easily to me, I learned to unfocus my gaze (I didn't try "spotting" as ballet dancers do). I realised the more I relaxed my focus and my breath, the less dizzy and nauseous I became and also the more still my mind became.

After spinning for 6 minutes or so I have felt completely exhilarated but not giddy, perhaps I could use the word ecstatic. although not in the sense that the Sufi's would use. Perhaps it's a feeling of connection to our spinning planet - I always spin barefoot and best of all is spinning barefoot on the earth. Spinning is an experience and once you have built up your practice, I can only think of it as being a positive and uplifitng addition to your hoop journey.

Begin slowly! Turning preferably anti-clockwise, building up the time you spin from 10 seconds to a minute and then beyond. You can focus your gaze on your hoop (but I have found this less comfortable than completely letting go). Don't worry if you wobble, just slow down and either continue slowly or stop by focusing your eyes onto the ground. Play some ambient music or try various speeds of drummig music - (African drumming/Indian Tabla) to help you find a rhythm or timing of your turns or just listen to the sound of your breathing. At first I was unable to stay in one spot and would veer off in all directions, so I suggest firstly using another hoop on the ground to keep you within a space and then as you become more accustomed to turning, focus on your feet. Your left foot will be the axis and the right will cross over the left. In the video above (which I shortened) - you can see when mind gets busy and I start to wobble!

I am planning another Sustained Spinning Workshop this September. The first hour will focus on single and double hoop moves that can be used whilst spinning and the second half will focus on the spinning and adding the hoops into the dance, with the intention of creating a beautiful choreography and I hope, an uplifting experience.

Check back soon
Once posts are published, you’ll see them here.

Creativity, Choreography and the Muse 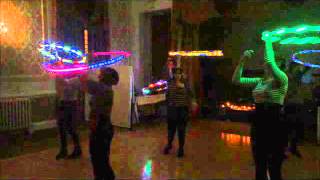 The Gift of the Circle 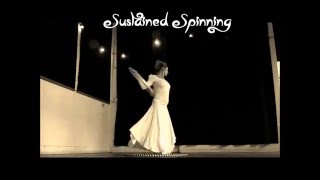 The Love Of Spinning 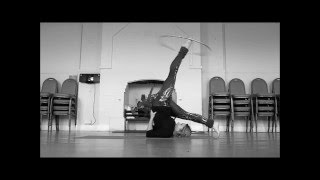 Find Your Balance with Yoga

As The Year Spins To A Close